Yesterday I went to Manitou Springs, Colorado as a sort of pilgrimage. I have a book about Sacred Sites in the US by state and this is the one site in Colorado. It happened to be a little over a 2-hour drive one way. The reason this place is held to be sacred goes back to the Indigenous tribes who “worshipped” (I use this term loosely as it is the term the book uses) the Gods of the waters here. There were at one time over 20 natural springs but, according to my book, only a few are available for travelers now. Many Indigenous tribes including the Navajo (Dineh), Shoshone, Algonquin, and others traveled to leave gifts at these waters. The water itself is mineral water in the truest sense as it percolates through the limestone rock it comes out bubbly. At least that is what I read.

I went on a very cool and cloudy day hoping that it would deter some of the tourists I thought I might find. The book on sacred sites that I have been following was written in 1993 so I expect some change as I go through the various places, but this was my first real pilgrimage, and I wasn’t sure what to expect. I arrived just after 12:30 pm to a massive traffic snarl due to road construction on the road entering the town. I drove around a bit but there was no parking anywhere on the main street. There were lots of people walking up and down though. I ended up having to park almost a mile away from the downtown and didn’t’ get to see much of it because I had to save my energy for the walk back. There was a free shuttle going downtown but there were at least 30 people waiting for it. I enjoyed the walk and the scenery just taking in the small-town goodness although it felt a little like going to a state fair with the parking and all the people. There were lots of charming stores of various kinds, and places to eat from cheap to expensive. I had a BLT and a lemonade and then set out trying to find a spring, any spring.

I walked a bit and realized I was not on the main street, so I cut through an arcade accidentally seeing a sign that read “Navajo Spring” Picture of the Hollyhocks in front of City Hall on Main Street, Manitou Springs, Colorado.

I followed the sign only to find another sign that pointed back the way I came. Not seeing any spring, just seating for the ice cream shop that was there, I pressed on. Down main street I wandered and accidentally found a spring. It was the Algonquin. It had been cemented up and bricked into a round house sort of thing with a trickle of fountain on the outside. There were already a couple people there drinking the water and snapping pictures when I walked down and then a whole crowd of about 8 people pushed in front of me to get to the spring. I simply turned and walked away. I’m not sure what I was expecting but cemented over sacred springs and rampant commercialism wasn’t it. On my way back home, I thought about those Medieval Crusaders and Pilgrims who went to Rome expecting the Zenith of Christianity but found only people interested in removing the gold from their possession. Any Christ like spirit was confined to the dark corners of churches few visited.

A few lessons come to mind here. Don’t expect Spiritual things to come from outside yourself. Sometimes they do, like in nature, but often, they don’t. Journeys don’t always end like we think they will. It’s good to go anyway. Somehow there was a tiny voice in the back of my brain that thought it was silly to drive for 2 hours one way to see a natural spring. The doing of the thing showed me that the hypercritical voice is still hanging out back there and I am now much more aware of it. Awareness is key because then I can shut it down when necessary. I think I got more enjoyment from the drive there and back, the scenery and clouds, than I did in the actual town. Although the town is adorable and a bit kitschy, I’m sure it has a lot more to offer than I saw up front in my couple of hours there.

And so ends my first official journey, pilgrimage, whatever. It wasn’t what I thought it would be, but then so few things really are. Thanks for coming along with me.
~Marie Wilkes

Picture of a pathway alongside the flowing river. 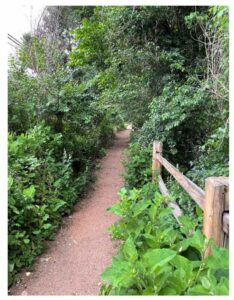 Saturday, July 24, 2021, I drove over to the Medicine Wheel National Historic Landmark. It took me over an hour to get there even though I am relatively close. There were just a few large mountains in the way. Around is longer but necessary sometimes. This Medicine Wheel is located at the top of a […]

I was deeply moved the first time I heard singer-songwriter Ani DiFranco’s song Overlap as she describes a relationship. And it was much later that I realized how clearly this can speak to my experiences within interfaith communities, and in particular, for the areas of diversity and inclusion. Ms. DiFranco wrote a phrase that you […]