Saturday, July 24, 2021, I drove over to the Medicine Wheel National Historic Landmark. It took me over an hour to get there even though I am relatively close. There were just a few large mountains in the way. Around is longer but necessary sometimes. This Medicine Wheel is located at the top of a mountain in the Big Horn Canyon National recreation area which is in Wyoming and Montana.

The Medicine wheel itself is believed to be about 600 years old. I believe it is far older, perhaps a few thousand years old. I do not have any proof of that belief but that’s ok. Indigenous tribes of many Nations have been coming here and utilizing this medicine wheel for an extraordinary long time. It is still in use today and when People come to do ceremony, other visitors are asked to stay back and be respectful, as it should be. 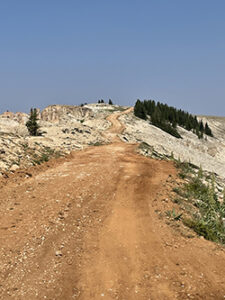 To get there, one has to drive up a mountain with switchbacks so tight you are advised to only go 20MPH. The grade going down is 10%. It’s a TREK in a car. As I was driving up, I was thinking about those peoples who have been coming there for centuries by foot and on horse. Once you get to the turn off, you are on gravel for another mile or so where there is a parking lot. At this point there is a Ranger station and a restroom. The Ranger asked me a few questions to see how fit I was to walk to the Medicine Wheel. There were three of them, all women. I like that. The were very friendly and personable. It is a 1.5-mile trek to the top of the mountain where the Medicine Wheel is located. It is at about 9000ft. As I walked, with my staff and my goofy but utilitarian hat, I realized that I was not as out of breath anymore. Almost as if I had been training for this climb, this pilgrimage. And indeed, I have been training for this, without realizing it. My spirit guides can be sneaky sometimes. Especially when they want me to do something I’m unsure of, they just sneak it in anyway and it always comes out good.

On the way there, during that 1.5-mile hike, I didn’t see many animals, but the wind would occasionally whip up through the valley and the strong scent on pine permeated, a little bit like when you go to get a real Christmas tree from a lot. There were some wildflowers in bloom, but the largest one, the Lamb’s Ear was just a few days from really flowering. Along the way, there are log benches to rest on. These benches have brass plaques on them dedicated to men from different indigenous tribes. AS I passed each of these benches, I put my hand on each plaque and thanked my brother for his work in this life. I read each name and his tribe aloud to the wind. When I finally got to the top, I was alone up there for a long time.

If you have ever lost someone who was very dear to you and you knew they could never come back, but they suddenly appeared right in front of you, that feeling, that is how I felt. It was like they were waiting for me to come and speak with them. This place, this land is sacred down deep into the earth from the centuries of use. The Spirits of the Ancestors visit and answer prayers that are left there.

The Wheel itself is about the size of a regular labyrinth, maybe 20 feet across? I’m guessing, but it’s not large. Surrounding the Wheel are thick wooden pillars about chest high, about every 10 feet. These wooden pillars have 3 strands of rope strung through them. The path runs outside these pillars. It is to these ropes that prayer bundles are tied. Some of them are traditional tobacco pouches in red, black, white, and yellow. Some of them are a lone feather, tied with a tobacco gift. There were stones and bones of animals inside the perimeter of the Path around the wheel. I saw shells including a large abalone shell. I think the most poignant prayer gift I saw was a leather pouch stuffed with something and tied to the top rope along with a lone feather. This was clearly a long-standing prayer/gift which was meant to last a long time. It is disrespectful to touch these prayers or in any way disturb them.

In the center of the Wheel is a Cairn of rocks which appear to be stacked haphazardly but I don’t’ think there’s anything haphazard about them. There are lines of rocks radiating out from the center, like spokes on a wheel. There are Cairns of rocks at intervals around the outside edge of the Wheel. The line of wooden pillars is about 2-3 feet outside of the actual line which marks the edge of the Wheel. One cannot just walk in there. There is a gate, and one must have a permit to enter. The gate is padlocked. And so, it must be, to protect such a treasure. I did not take a picture of the actual Wheel, because it felt sacrilegious to me. Any more than I would take a picture of a sacred relic in a Christian Church. Only from a distance did I take a picture so you could see the environment of the place.

As I walked to the left, around the structure, Bear and Fox walked with me. They just showed up. I was crying, of course, because I felt my long-lost brothers there. It may come as no surprise to those of you who are following this journey, that I believe in Reincarnation. I have been a native man in a past life whose name was Man Who Stands Apart/Alone. He was a very gifted Shaman/Medicine Man and was feared because of these gifts. In fact, he was not welcomed into any camp but stayed outside the camp and the people who needed healing came to him. Because of this he was almost always alone and that was his life. But today, my brother Ancestors welcomed me, they recognized my Spirit. They asked why it took me so long to visit them. I walked around the Medicine Wheel three times, as is my way, with Bear and Fox keeping me company. The first time around, I went slowly, and I touched every wooden pillar on my way around. I looked at all the prayer/gifts tied on the ropes, and I cried, wiping tears off my face. The second time around I activated my Reiki and opened myself to the prayers on top of this mountain, speaking to the Ancestors as I walked, asking that these prayers be answered. On the third time around, I sat down when I was about halfway and just opened my heart and listened. I thanked the Ancestors for welcoming me back. I came prepared with a gift, a small raw emerald, which I left on the pillar to the right of the gate.

I knew my time was done when a lot more people showed up. It is a wonderful thing how the Universal Energy makes sure I have some solitude with my sojourns to these sacred places. I was sitting on a rock nearby, unwilling to begin the journey back, not quite yet. Something felt undone. I watched a (old whitedude) man walk to the RIGHT when it expressly says to walk to the left on the sign. Then when he was done, he walked off the path across the grass. I was annoyed with his disrespect but was told that he earned himself some Karma that day. Next, I saw a family of 4, Husband, wife, son, and son’s wife. They had a dog with them, and dogs are not allowed on the path around the Medicine Wheel. So, the dad stayed back with the dog (respect). I walked over to him and offered to hold the dog while they walked together as a family. He said sure and thanked me. My guides said, “an Act of Service to seal your prayers.” When the son came and got the dog, just a few minutes later, I knew it was time to head back down the trail. A sense of something finished is all I can tell you. 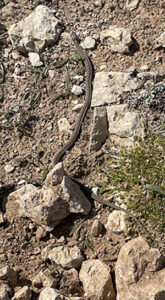 I didn’t see any animals on the way up, but on the way down, I saw a baby snake, about a foot long and less than a half inch around. Snakes are symbols of rebirth. Next, I was sitting on one of those benches I told you about because I managed to get rocks in my shoes. I was emptying them of pebbles when a golden Eagle flew above my head. Besides Bear and Fox, Eagle is my third animal guide. And of course, the Eagle is a sacred symbol for Indigenous peoples as well. I felt so blessed by that eagle, another sign that I’m on the right path. Once I had dealt with the rocks in my shoes and started walking again, I heard a little noise to my right (the mountain side, not the valley side) so I stopped and was very still. I saw a tiny creature, brown so it blended in with the rock, furry, and about the size of a gerbil. It had cute little mouse ears, but I knew it couldn’t be a mouse. When I got back to the Ranger station, I described the creature and asked what it could be. The young woman said it was a Pika and that I had really gotten lucky because they are very timid and rarely seen! I felt blessed three times!

I had the forethought to pack myself a little lunch because I knew I would be hungry after a three-mile hike at 9000ft. I sat in my car, with my windows down and thought about my amazing journey to the Medicine Wheel.

Yesterday I went to Manitou Springs, Colorado as a sort of pilgrimage. I have a book about Sacred Sites in the US by state and this is the one site in Colorado. It happened to be a little over a 2-hour drive one way. The reason this place is held to be sacred goes back […]

I was deeply moved the first time I heard singer-songwriter Ani DiFranco’s song Overlap as she describes a relationship. And it was much later that I realized how clearly this can speak to my experiences within interfaith communities, and in particular, for the areas of diversity and inclusion. Ms. DiFranco wrote a phrase that you […]